A big hand for making it this far... 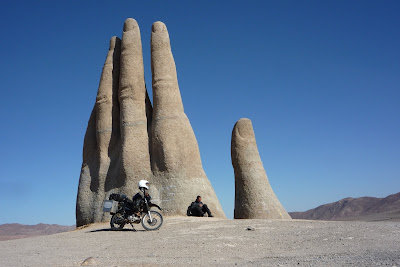 The Atacama is the driest desert on earth. When it rained in 1971 it broke a 400 year drought. In other parts rain has never been recorded at all. 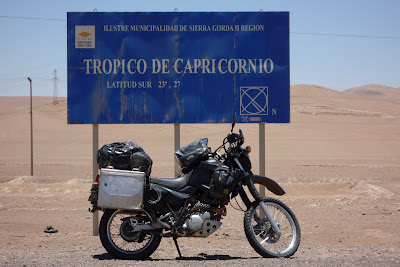 Today's activity: sandboarding on a 300m high dune in the rather unfortunately named Valley of Death. 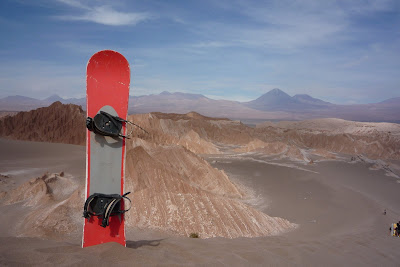 Then to the Valley of the Moon: 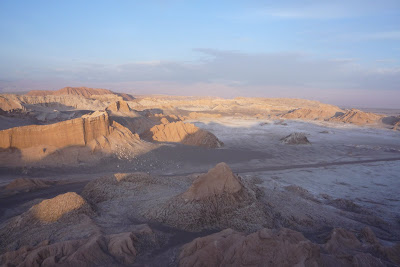 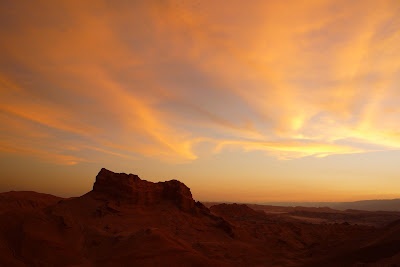 Two days of mud, dirt, gravel, sand and corrugations to get to Chile, but the scenery made up for the state of the road. 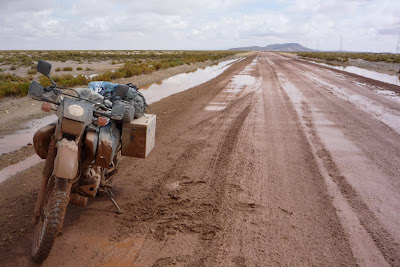 At the point that the track was at its wettest a car overtook me, spraying me from head to toe. Unfortunately I didn't get my visor down quickly enough and was blinded by mud.

I got to the Bolivian border without realising it. I stopped to ask for directions and it just so happened the person I asked was the Bolivian Customs man.

The off-road riding must've been more mentally tiring than I realised. Despite having been travelling through spanish speaking countries for the last three months, for some reason when I asked the border guard if there was a hotel nearby I did so in russian. 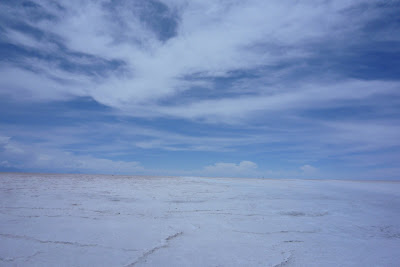 The Salar de Uyuni in Bolivia is the world's largest salt flat, covering an area of 4,085 square miles (about half the size of Wales).

It wasn't the poshest hotel I've stayed in, but it was certainly the smartest parking spot the bike's had.

The World's Most Dangerous Road (?) 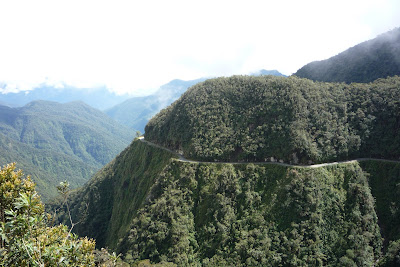 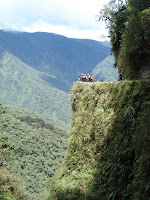 Although it feels as though I've been riding on the world's most dangerous road for much of the last 29,744 miles, in 1995 the road from La Cumbra to Coroico in Bolivia was named as the most dangerous. Known as the road of death its a single track dirt road that clings to the side of a mountain with drop-offs of up to 600m, with an estimated 200 to 300 fatalities a year.
In 2006 a new road was opened which now takes most of the traffic, leaving the old road to be used mainly by mountain bikers and television presenters.
Although its undoubtedly no longer the world's most dangerous road it has still claimed the lives of 11 cyclists.
For more on the road of death click here: http://news.bbc.co.uk/2/hi/programmes/from_our_own_correspondent/6136268.stm

The journey into the city was a bit hectic and wasn't helped by a complete lack of signposts. I asked five different people for directions (three of whom were traffic police) and got five different answers.

Back up to lake Titicaca to cross into Bolivia and then a ferry across the lake on the way to La Paz.

There was a two pound 'fee' for the policeman at the border. I wasn't quite sure if it was to get him to do his job (fill out the paperwork) or to make sure he didn't (searching my luggage). 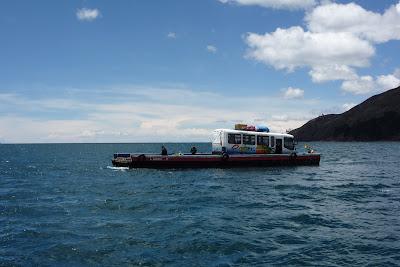 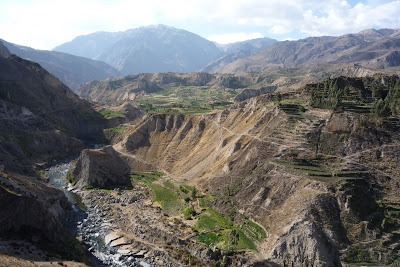 At 3,191m Colca canyon is one of the world's deepest. A dirt track runs alongside it to a look-out point where if you're lucky you can see condors. The track starts off okay but gets progressively worse. It was at one of the tricky bits (downhill, loose gravel & dirt) that I was faced with a donkey roadblock. My attempt to avoid them ended with both me and the bike on our sides. I carried on a bit further after that but when the wind got so strong that it threatened to blow me off the road and into the canyon I decided that the condors weren't worth it and turned back. 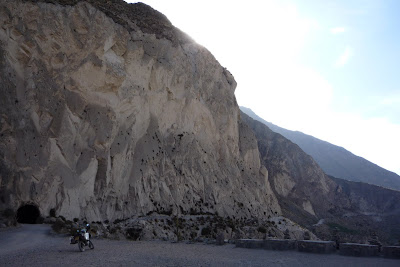 On the journey from Arequipa to the canyon I reached the highest altitude of the trip so far - 4,900m. That's higher than Mont Blanc but as the rest of the day was spent riding over a 4,500m plateaux I wasn't really aware of the extra gain in height. 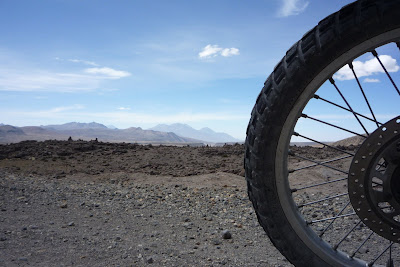 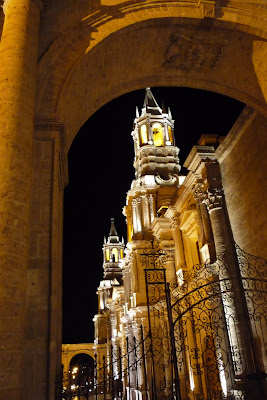 
A slap-up meal of alpaca meat for dinner tonight. What does alpaca taste of? A bit like llama really. Some express tourism today - I arrived in Puno at 3.30, by 4pm I'd checked into a hotel and was on a boat trip to the floating reed islands on lake Titicaca.

The boats aren't quite as traditional as they look - each one is made of 3,000 plastic drink bottles and is then covered in reeds. 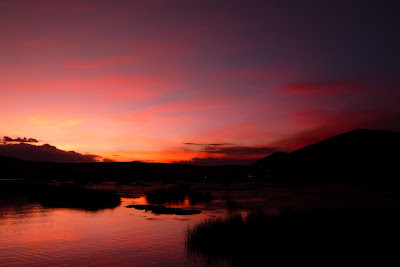 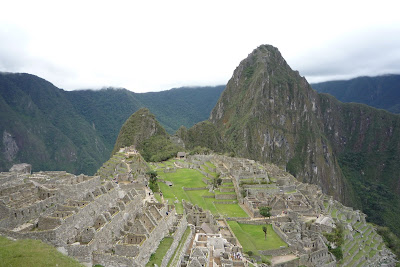 When somewhere is as well known and over-hyped as Machu Picchu there's a danger that visiting it could be an anti-climax.
It isn't.
It lives up to expectations and then some. 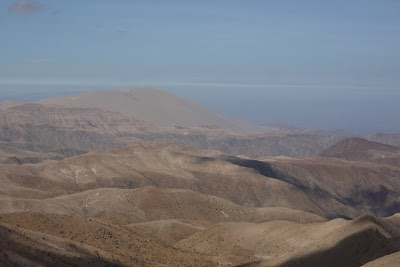 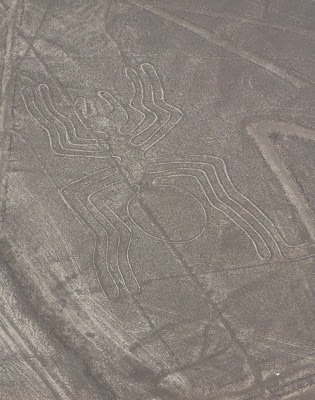 The nasca lines were formed around 2,000 years ago by removing the reddish pebbles that cover the ground to reveal the lighter earth underneath. The jury is still out as to why they were formed though its believed they have religious significance. 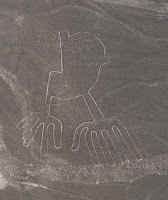 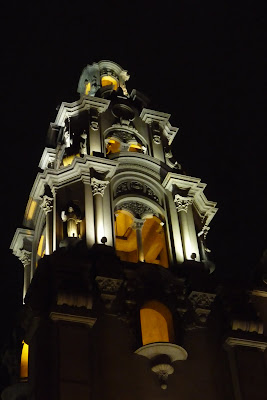 The idea was to take a dirt road from the coast into the mountains. Unfortunately it was being rebuilt which meant lots of delays and after 70km the road was blocked completely. Waiting for it to be cleared would've meant having to finish the journey in darkness so it was back down to the coast road. 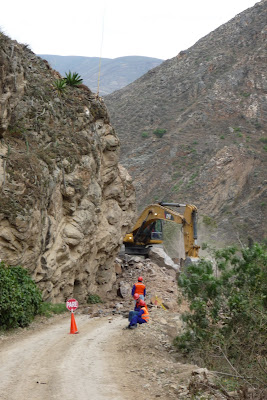 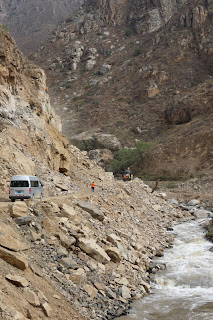 A day spent visiting ruins around Trujillo. In the morning the temples of the sun and moon, constructed over 1,500 years ago, and in the afternoon Chan Chan - the largest pre-Columbian city in the americas. 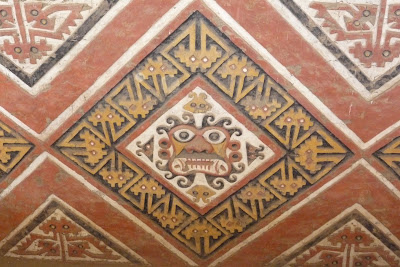 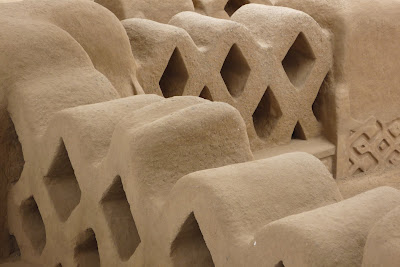 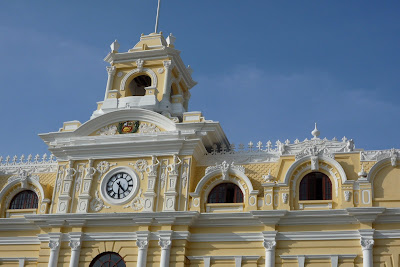 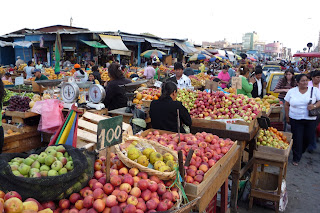 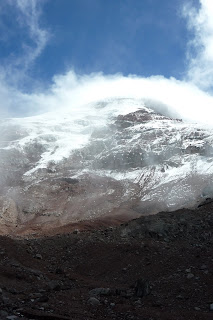 Due to the earth's equatorial bulge the peak of Chimborazo (6,310m) is the point furthest from the center of the earth. In an effort to work off my own equatorial bulge I went for a cycle ride around it. A cup of coca leaf tea at 5,000m to help with the altitude then a 3 hour ride around the mountain to a village for a lunch of llama meat and potatoes. 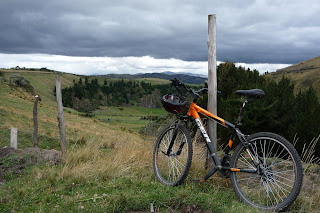 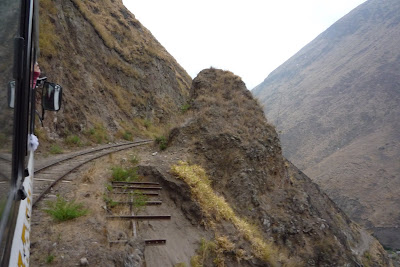 There are quite a few activities to choose from in Riobamba - I picked the devil's nose. The devil's nose is a train ride that winds its way down the side of a mountain. It was constructed in 1902 to link the coast with the highlands and judging by the state of track hasn't seen much maintenance since. Infact its so bad that trains are no longer allowed to use it so you make your way down on a bus converted to run on rails.