I´m back in Buenos Aires, which unfortunately means my time in South America is almost at an end. Tomorrow I´m going to a shipping agent to organise the bike´s return home and once I´ve done that I can book my flight.
Then again, I left my tyre inflator behind in Russia so perhaps I should just retrace my steps and go and pick it up.

I´d forgotten that Argentinians like to eat late - at 8 o´clock at night I´m tucking in to my dinner, everybody else in the restaurant is having afternoon coffee. 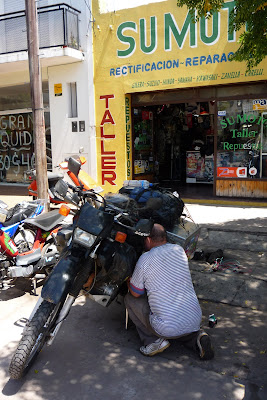 Yesterday the bike started with the help of a jump start. This morning that didn´t work - it needed a push start, and another one when I stopped for petrol. I tried three bike shops in Colon (where I stayed overnight) for a battery but it took another three attempts in Gualeguaychu before I finally struck lucky. The new battery didn´t solve the problem, however, and after a bit of hot-wiring the mechanic diagnosed the starter switch. Now, this being a back-street garage in rural Argentina they obviously didn´t have an original Yamaha replacement but they did have a universal switch. The only problem with that was that the connectors didn´t line-up and after half an hour of pulling wires apart he still couldn´t get it to work. Just as he was trying a second switch it struck me - "Starter switch!". I´m sure that was one of the spares I brought with me and after emptying out my pannier I found it. Now if I´d´ve been him I think at this point I would´ve been cursing the dumb Englishman who´d just produced the spare part that I´d needed 45 minutes ago but fortunately he just seemed pleased to have it. By this time there was no way of knowing how the wiring was originally and it took another 20 minutes of trial and error to work it out.
When I got the bill the battery was on there but my new Argentinian best friend wouldn´t accept anything for the hour and a half´s labour. Instead there was an exchange of gifts - I got an Argentinian sticker and he got a couple of Union Jack badges.

I wonder if I'll still have my lunch at petrol stations when I get back to England?

I decided to give the bike a treat and wash it yesterday afternoon. How does it repay this act of kindness? With a flat battery this morning. It had a new battery before I left, it needed a new one in Panama City and now it needs a third meaning I'm only getting six months use out of each one.

Green fields, cows, a pleasant 22 degrees. I was just thinking this could be England. Then a flamingo flew overhead to remind me it
wasn´t.

Back to Buenos Aires

I was hoping that from Rio it would be a short hop down to Sao Paulo in order to arrange the shipping of the bike back home. Unfortunately the shipping agent I´ve been in contact with has told me that the Brazilian customs procedure is a long-winded and expensive bureaucratic nightmare so I´ve decided to take a rather longer hop back to Buenos Aires and ship the bike from there instead. 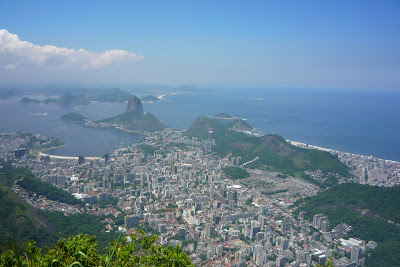 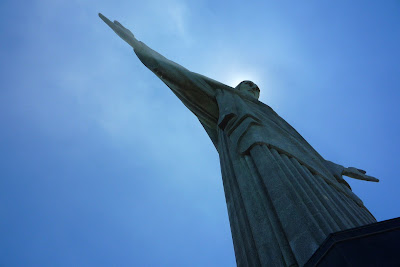 I´ve missed the carnival by a few days but that was a conscious decision - a hotel room would´ve been 300 pounds a night and even to get a bed in a hostel dorm would´ve been 50 pounds but with a 7 night minimum stay. 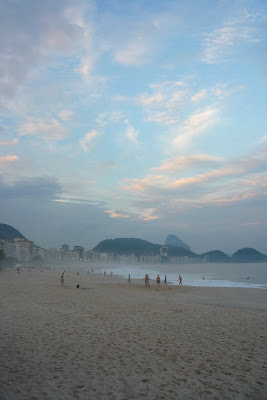 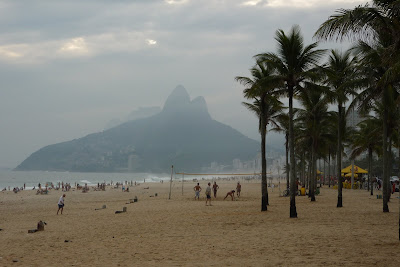 I´d was hoping there´d be a money exchange at the Brazilian border so I could change the last of my Argentinian Pesos into Brazilian Reals. There wasn´t, so I headed off in search of a bank. Before I found a bank, however, I came to a toll booth. In most South American countries bikes don´t pay tolls but in Brazil they do. I had no Reals and they didn´t accept Pesos or credit cards. With the traffic building up behind me the supervisor came over and told me I´d have to go back to a town 30km away. Fotunately at that point a guy in the van behind took pity on me and changed some of my Pesos.
Thankfully I found a bank before I got to the next toll booth. 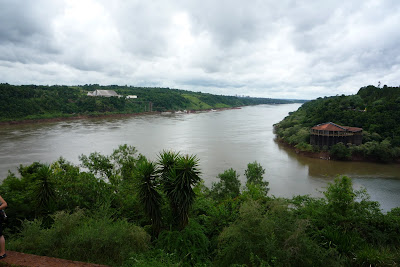 The foreground is Argentina, the riverbank on the left is Paraguay, on the right is Brazil. 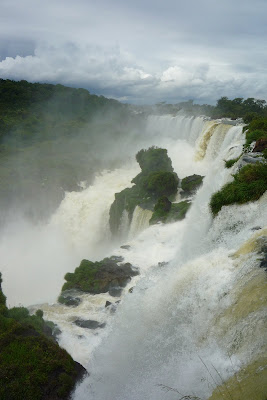 To check the oil on the Yamaha you have to have a warm engine so I normally do it when I stop for petrol. This morning I left Montevideo and after about 20km I decided to pull over to check it. When I got off the bike most of the oil was in a puddle on the ground under the sump. I hoped it might just've been that the sump plug had come loose but unfortunately it wasn't that simple. I started the engine and saw that the oil was dripping from somewhere higher up. Fortunately I'd bought a litre of spare oil in Buenos Aires (I don't normally carry that much) so I put that in and decided to limp back into Montevideo. I came to a petrol station after 16km so I put in another litre of oil and got directions to a bike shop about a mile away. Within about 20 minutes the culprit had been identified - a leaky seal behind the front sprocket. They managed to track down a replacement and within a couple of hours I was on my way again. If I hadn't have stopped to check my oil I probably wouldn't have known anything was wrong until the engine seized.
I'm glad to report the workshop, like all the others I've found myself in on this trip, conformed to the international blueprint for garages - one guy doing a bit of work and 3 or 4 others who stand around drinking tea. 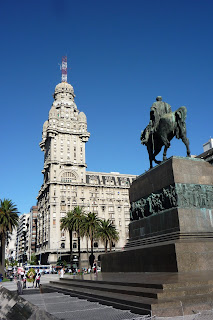 The Palacio Salvo in Montevideo was the tallest building in South America when it was built in 1925.

Colonia del Sacramento was founded by the Portuguese in 1680 in order to smuggle goods across the River Plate to Buenos Aires. The River Plate is the widest river in the world - 137 miles wide at its mouth.

From Buenos Aires the closest border crossing into Uruguay is at the town of Frey Bentos. Before I left Buenos Aires this morning I was warned that due to a dispute between Argentina and Uruguay the local Argentinians had set up a roadblock to stop traffic getting to the border. When I stopped to ask for directions in a town about 30km before the border I was again told that I couldn't get through and that the road had been closed since 2006. As the alternative border crossing was about 100km away I decided to try my luck and head for the border anyway.
20km further on and there was the roadblock. I rode up to it and the guy manning the barrier told me I'd have to turn around. I told him I thought it was a pretty poor show and was just about to turn the bike around when he had a change of heart and let me through.
Fortunately, despite a complete lack of traffic, the border post is still manned and so I had what must be the quickest border crossing to date - out of Argentina and into Uruguay in 10 minutes.

Yesterday was spent treating the bike to an oil change and a new rear tyre, today was spent sight-seeing. The street in the picture above is claimed to be the widest in the world, the building below is the presidential palace. 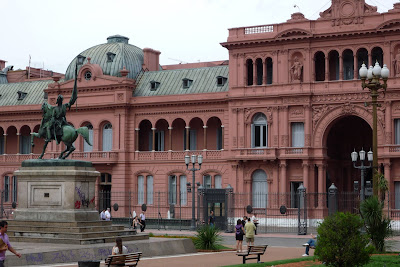