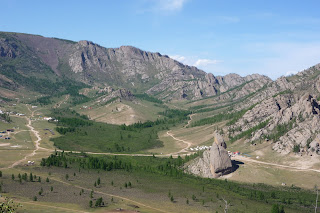 Did you know.....the Mongol empire once stretched from Poland to Beijing? 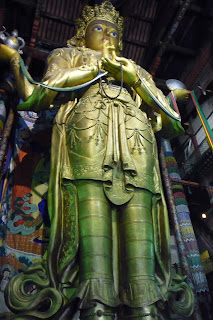 Dinner with the locals. Dumplings and rice whilst watching Mongolian X Factor.

I thought I'd better write that a couple of times. I'm unlikely to ever be able to write it again. 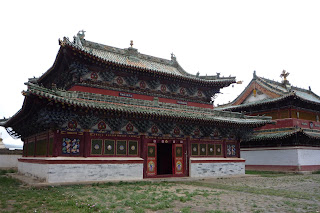 Did you know.....Mongolia has the world's lowest population density: 1.4 persons per square kilometer?

Seven days ago I entered Mongolia and today I reached tarmac after 1,405km (878 miles). That's the equivalent of Lands End to John O'Groats off-road.

Lunch with the locals - the children all sat on the bed and watched me eat my mutton & noodle soup whilst the men of the house studied my map and read the Lonely Planet guide to Mongolia.

After lunch another river crossing.

In the evening I decided to treat myself to a hotel, but managed to find one without a shower. So it was off to the local bathhouse. I couldn't quite decide if it reminded me more of an abatoir or a torture chamber, but the shower was good.
Random Mongolia Fact: Mongolia is one of the highest countries in the world, with an average elevation of 1580 meters.

The 220km journey from Olgii to Khovd took 9 hours, including four river crossings (which were more than my Slovenian freezer bags could cope with). There were times when I seriously thought I was on the wrong track, I couldn't believe I was on the main road to anywhere, but I asked every Mongol herdsman I came across (I came across 3) and they confirmed I was going the right way.

Olgii is 90 degrees due east of London, which means I've now ridden a quarter of the way around the world.

I know how you all love a nice road picture.

This snow covered dirt track is what passes for a main road in Mongolia. The first 12km took one and a half hours. Only 2,000km to go.

On leaving the tent this morning I discovered some rather large feline-shaped footprints in the snow. Apparantly Mongolia is home to the snow leopard. 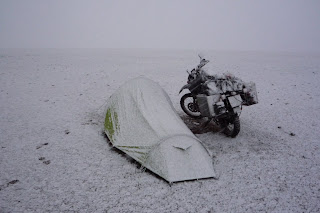 h, to be in Mongolia, now that summer's here.

Lovely smooth tarmac, twisty roads and alpine scenery. The only downside is I'm having to miss Ascot week to be here.

There were two reasons for coming to Barnaul - firstly to book into a hotel so that they can register my visa and secondly to find a bike shop to buy some oil and fit a new tyre. At the fourth attempt I found a reasonably priced hotel with decent rooms and parking . Whilst unloading a local biker spotted the bike and stopped. He's going to come back and meet me tomorrow morning to take me to a bike shop. Result.

It turns out the hotel I'm staying in has an in-house marriage agency, so I could pick up a Russian bride whilst I'm here. The only problem is where would I put her - the bike's overloaded as it is.

Quiz Time:
10 points to the first person who can tell me who said Russia is "a riddle wrapped in a mystery inside an enigma"

Between 1949 and 1989 the Soviets exploded 460 nuclear bombs just to the west of Semey, so I don't think I'll be hanging around for long. The town isn't very photogenic so here's one of last night's camping spot instead. 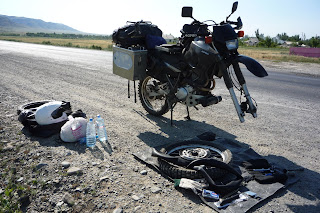 Unfortunately Dave, who I've been riding with, came off his bike 2 days ago and has chipped a bone in his leg. As a result his leg's in plaster for a month and so he's flying home. So from now on I'll be riding alone. 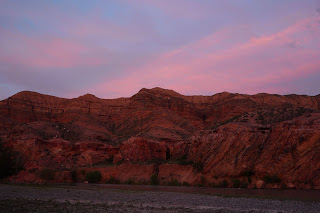 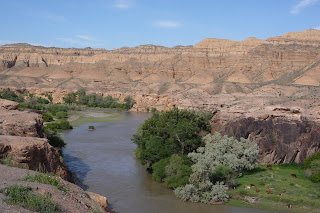 I think its fair to say we are the only two Brits in Almaty who aren't here for the football. But I did make the effort and watch the match in a bar with a beer and a Kazakh brandy chaser.

Almaty is roughly the halfway point between London and Vladivostok, which makes me realise just how far I've still got to go.

After more than 6,000 miles of blatently ignoring speed limits I got pulled over today for doing 69kph in a 50 zone. The Kazakh policeman's opening offer was a 50 dollar fine, which I politely refused. It then came down to about 30, but after watching the locals who were also being stopped it became clear that all was required was 2 pound bribe. The bribe duely handed over and I was on my way again. I think its an example the British police would do well to follow.

Later that day and I was stopped again. This time for a failed headlight bulb. You have to have your lights on all the time in Kazakhstan and I didn't realise mine wasn't working. Here we go again, I thought, another 2 pound bribe. But this time they obviously thought it wasn't worth wasting their time trying to get money out of me and sent me on my way.

I replaced the bulb in the evening but it turned out that wasn't the only problem - still no headlights. Six thousand miles and my first problem with the bike. So there was nothing else for it but to take the switch and connectors apart, douse them in WD40 and put it back together again. Result - working headlight. It just adds to my belief that all you need to fix a bike is WD40, duck tape and cable ties.

The idea was to camp near the border this evening but the land was very agricultural and all cultivated so there was nothing else for it but to knock on someone's door and ask to camp in their garden. The house we chose didn't have a garden but did have a veranda so we were offered that, although we were lated upgraded to the living room floor. The village didn't have a pub so we were taken by one of the extended family (who all seemed to be called Borat) to the local shop where we sat and had a cold beer whilst being quized by the locals.

The good news is I have a fresh Kazakhstan visa. The bad news is the border with Kyrgyzstan is definitely closed, so leaving Tashkent this morning and heading for Almaty.

In Tashkent for 2 days waiting for another Kazakh visa.
Nasty rumour of the day: the border of Uzbekistan and Kyrgyzstan is closed due to a bomb attack. If that is true it'll mean missing out on Kyrgyzstan and heading north straight into Kazakhstan. On the plus side though, I've found a brew-pub that does a very reasonable pint and an Italian restaurant that does a half decent cappucino - and when its the only one this side of the Bosphorus half decent is good enough.